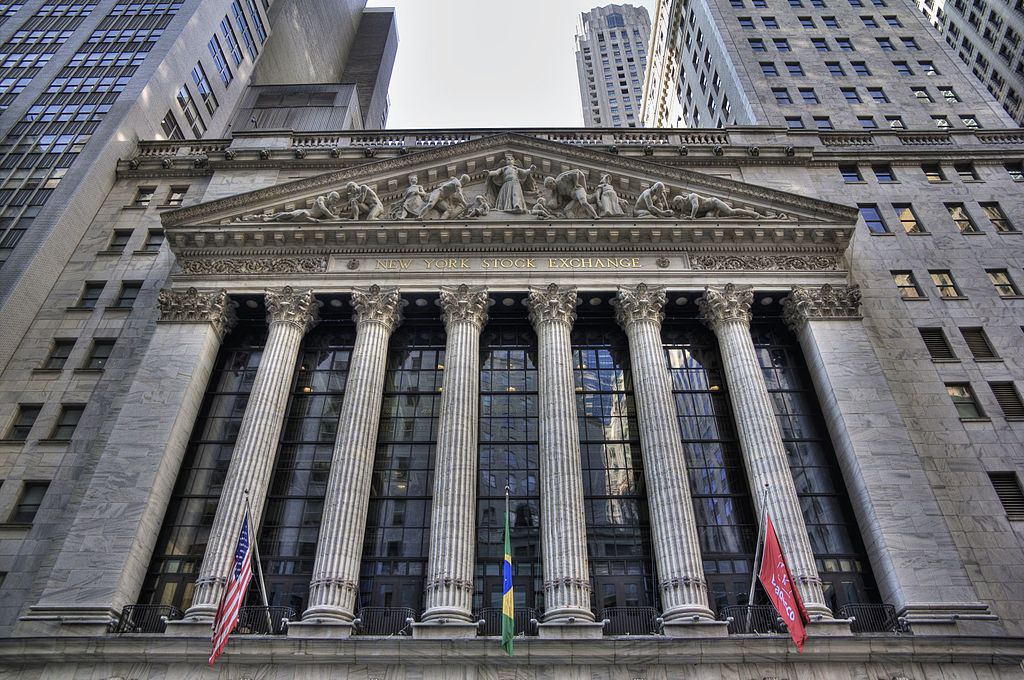 A stock exchange, securities exchange, or bourse is an exchange where stockbrokers and traders can buy and sell securities, such as shares of stock, bonds, and other financial instruments. Stock exchanges may also provide facilities for the issue and redemption of such securities and instruments and capital events including the payment of income and dividends. Securities traded on a stock exchange include stock issued by listed companies, unit trusts, derivatives, pooled investment products and bonds. Stock exchanges often function as “continuous auction” markets with buyers and sellers consummating transactions via open outcry at a central location such as the floor of the exchange or by using an electronic trading platform. 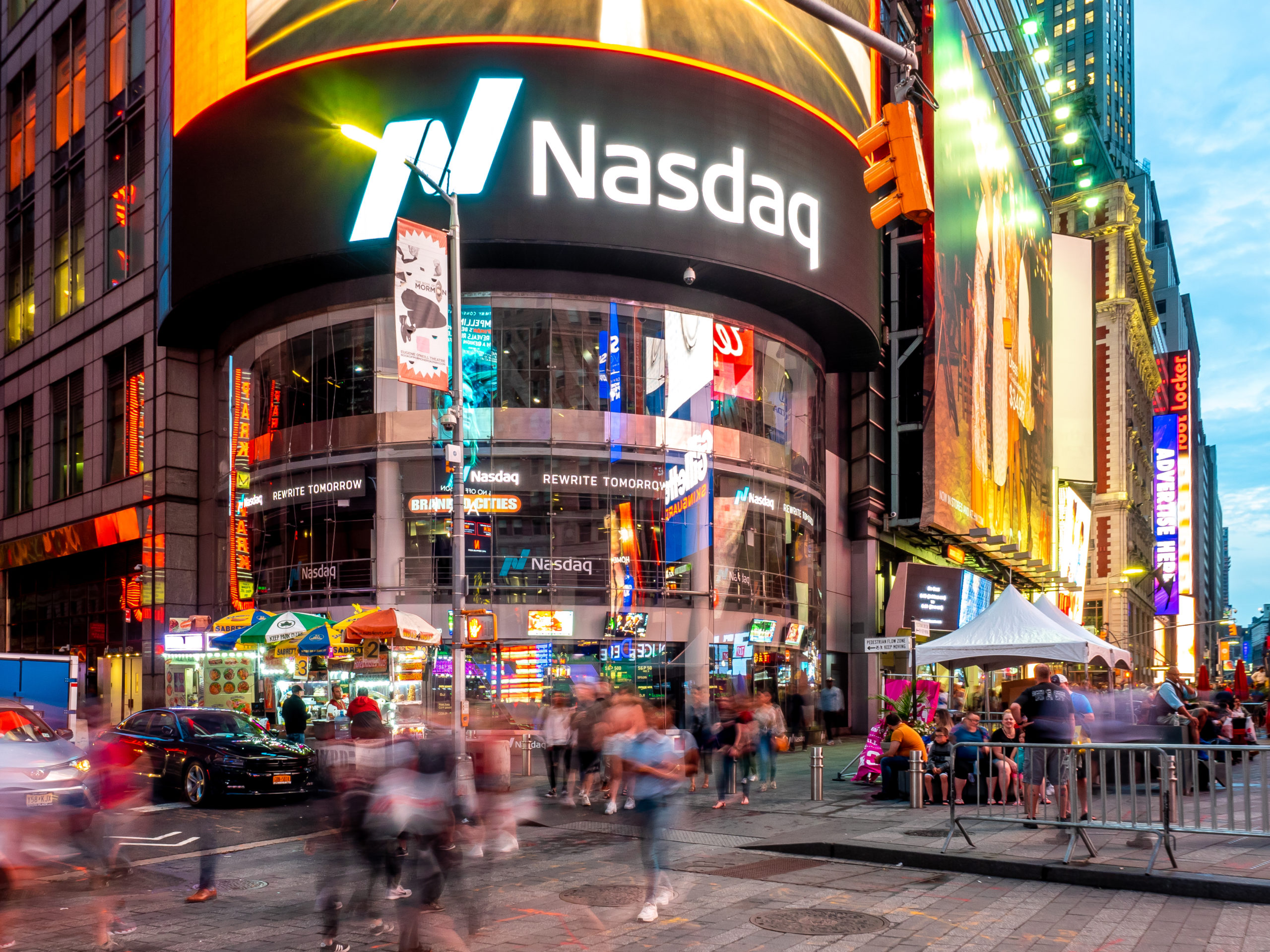 Nasdaq in New York City, USA is the second-largest stock exchange in the world

To be able to trade a security on a certain stock exchange, the security must be listed there. Usually, there is a central location at least for record keeping, but trade is increasingly less linked to a physical place, as modern markets use electronic communication networks, which give them advantages of increased speed and reduced cost of transactions. Trade on an exchange is restricted to brokers who are members of the exchange. In recent years, various other trading venues, such as electronic communication networks, alternative trading systems and “dark pools” have taken much of the trading activity away from traditional stock exchanges.

Initial public offerings of stocks and bonds to investors is done in the primary market and subsequent trading is done in the secondary market. A stock exchange is often the most important component of a stock market. Supply and demand in stock markets are driven by various factors that, as in all free markets, affect the price of stocks.

There is usually no obligation for stock to be issued through the stock exchange itself, nor must stock be subsequently traded on an exchange. Such trading may be off exchange or over-the-counter. This is the usual way that derivatives and bonds are traded. Increasingly, stock exchanges are part of a global securities market. Stock exchanges also serve an economic function in providing liquidity to shareholders in providing an efficient means of disposing of shares.

Stock exchanges roles in the economy

Stock exchanges have multiple roles in the economy. This may include the following:

Besides the borrowing capacity provided to an individual or firm by the banking system, in the form of credit or a loan, a stock exchange provides companies with the facility to raise capital for expansion through selling shares to the investing public.

Capital intensive companies, particularly high tech companies, always need to raise high volumes of capital in their early stages. For this reason, the public market provided by the stock exchanges has been one of the most important funding sources for many capital intensive startups. In the 1990s and early 2000s, hi-tech listed companies experienced a boom and bust in the world’s major stock exchanges. Since then, it has been much more demanding for the high-tech entrepreneur to take his/her company public, unless either the company is already generating sales and earnings, or the company has demonstrated credibility and potential from successful outcomes: clinical trials, market research, patent registrations, etc. This is quite different from the situation of the 1990s to early-2000s period, when a number of companies (particularly Internet boom and biotechnology companies) went public in the most prominent stock exchanges around the world in the total absence of sales, earnings, or any type of well-documented promising outcome. Though it’s not as common, it still happens that highly speculative and financially unpredictable hi-tech startups are listed for the first time in a major stock exchange. Additionally, there are smaller, specialized entry markets for these kind of companies with stock indexes tracking their performance (examples include the Alternext, CAC Small, SDAX, TecDAX).

By having a wide and varied scope of owners, companies generally tend to improve management standards and efficiency to satisfy the demands of these shareholders and the more stringent rules for public corporations imposed by public stock exchanges and the government. This improvement can be attributed in some cases to the price mechanism exerted through shares of stock, wherein the price of the stock falls when management is considered poor (making the firm vulnerable to a takeover by new management) or rises when management is doing well (making the firm less vulnerable to a takeover). In addition, publicly listed shares are subject to greater transparency so that investors can make informed decisions about a purchase. Consequently, it is alleged that public companies (companies that are owned by shareholders who are members of the general public and trade shares on public exchanges) tend to have better management records than privately held companies (those companies where shares are not publicly traded, often owned by the company founders, their families and heirs, or otherwise by a small group of investors).

Despite this claim, some well-documented cases are known where it is alleged that there has been considerable slippage in corporate governance on the part of some public companies, particularly in the cases of accounting scandals. The policies that led to the dot-com bubble in the late 1990s and the subprime mortgage crisis in 2007–08 are also examples of corporate mismanagement. The mismanagement of companies such as Pets.com (2000), Enron (2001), One.Tel (2001), Sunbeam Products (2001), Webvan (2001), Adelphia Communications Corporation (2002), MCI WorldCom (2002), Parmalat (2003), American International Group (2008), Bear Stearns (2008), Lehman Brothers (2008), General Motors (2009) and Satyam Computer Services (2009) all received plenty of media attention.

Many banks and companies worldwide utilize securities identification numbers (ISIN) to identify, uniquely, their stocks, bonds and other securities. Adding an ISIN code helps to distinctly identify securities and the ISIN system is used worldwide by funds, companies, and governments.

However, when poor financial, ethical or managerial records become public, stock investors tend to lose money as the stock and the company tend to lose value. In the stock exchanges, shareholders of underperforming firms are often penalized by significant share price decline, and they tend as well to dismiss incompetent management teams.

As opposed to other businesses that require huge capital outlay, investing in shares is open to both the large and small stock investors as minimum investment amounts are minimal. Therefore, the stock exchange provides the opportunity for small investors to own shares of the same companies as large investors.

Governments at various levels may decide to borrow money to finance infrastructure projects such as sewage and water treatment works or housing estates by selling another category of securities known as bonds. These bonds can be raised through the stock exchange whereby members of the public buy them, thus loaning money to the government. The issuance of such bonds can obviate, in the short term, direct taxation of citizens to finance development—though by securing such bonds with the full faith and credit of the government instead of with collateral, the government must eventually tax citizens or otherwise raise additional funds to make any regular coupon payments and refund the principal when the bonds mature.

Barometer of the economy

At the stock exchange, share prices rise and fall depending, largely, on economic forces. Share prices tend to rise or remain stable when companies and the economy in general show signs of stability and growth. A recession, depression, or financial crisis could eventually lead to a stock market crash. Therefore, the movement of share prices and in general of the stock indexes can be an indicator of the general trend in the economy.

Each stock exchange imposes its own listing requirements upon companies that want to be listed on that exchange. Such conditions may include minimum number of shares outstanding, minimum market capitalization, and minimum annual income.

The listing requirements imposed by some stock exchanges include:

NASDAQ Stock Exchange: NASDAQ requires a company to have issued at least 1.25 million shares of stock worth at least $70 million and must have earned more than $11 million over the last three years. 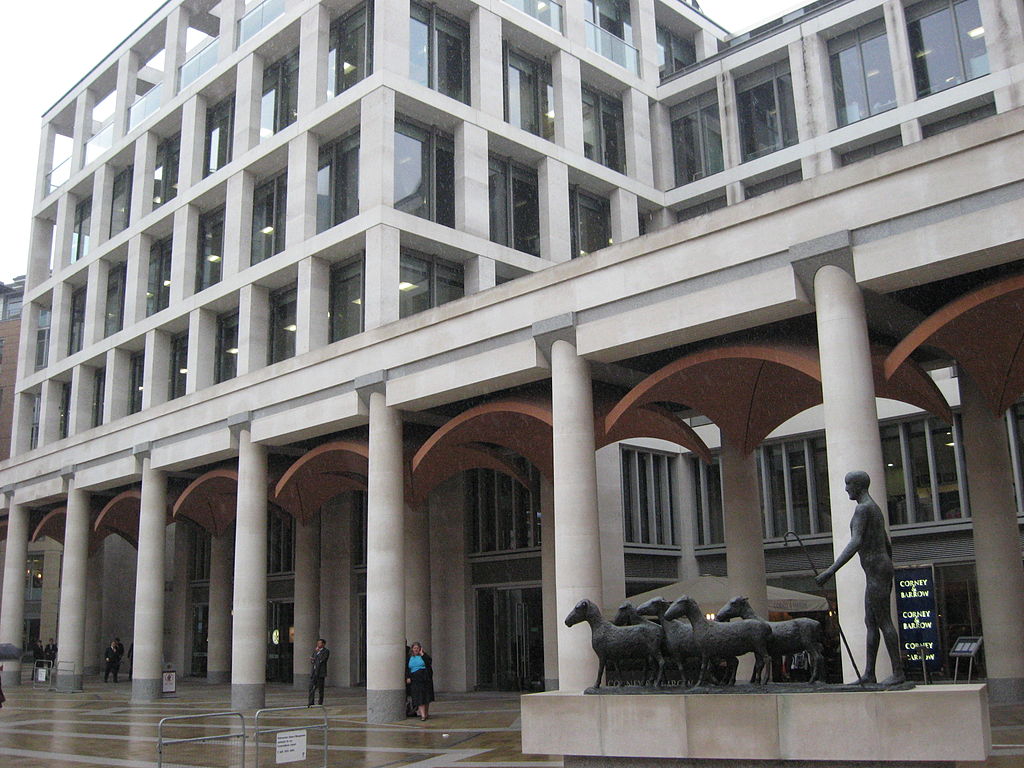 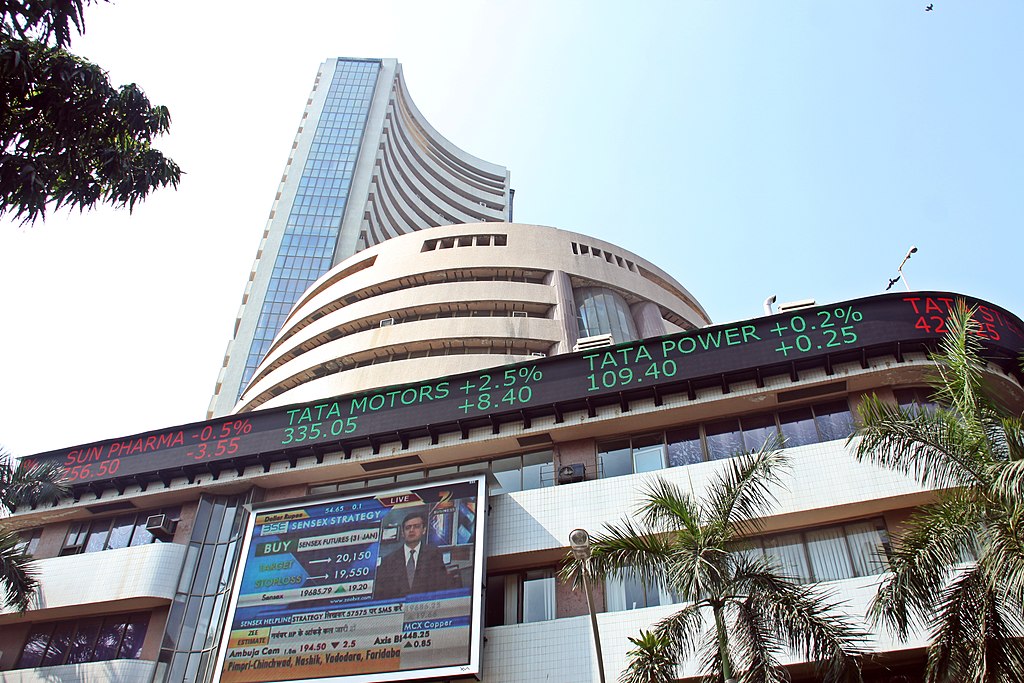 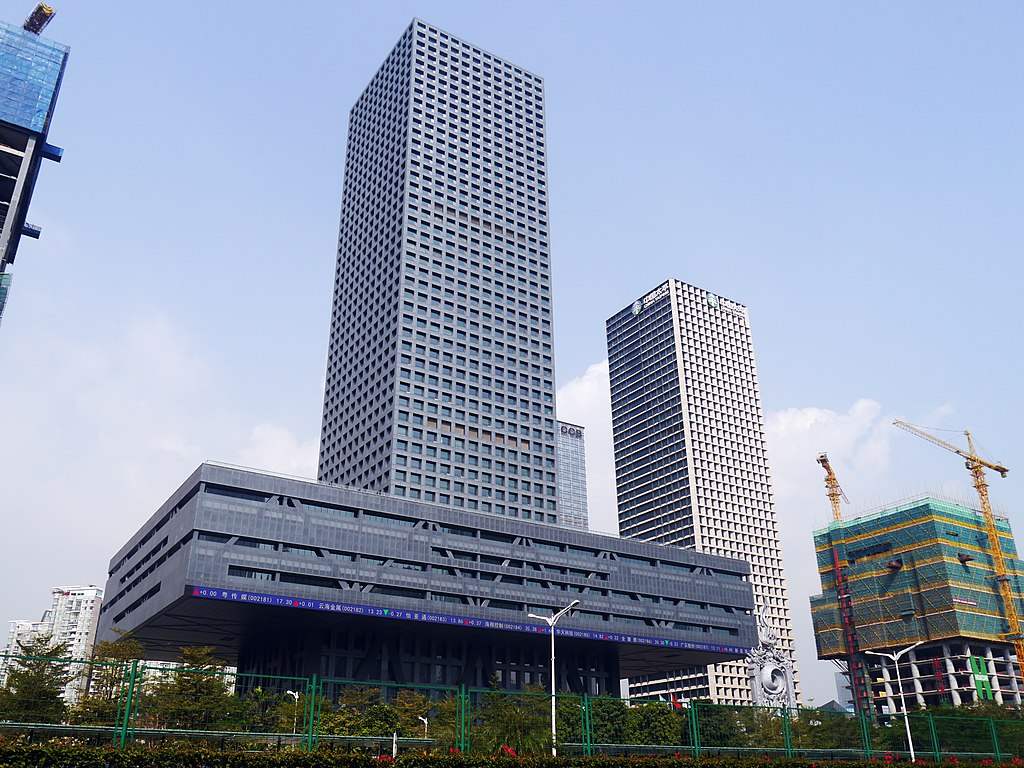 The Shenzhen Stock Exchange and Shanghai Stock Exchange can be characterized as quasi-state institutions insofar as they were created by government bodies in China and their leading personnel are directly appointed by the China Securities Regulatory Commission.

In 2018, there were 15 licensed stock exchanges in the United States, of which 13 actively traded securities. All of these exchanges were owned by three publicly traded multinational companies, Intercontinental Exchange, Nasdaq, Inc., and Cboe Global Markets, except one, IEX. In 2019, a group of financial corporations announced plans to open a members owned exchange, MEMX, an ownership structure similar to the mutual organizations of earlier exchanges.